According to American Dental Association (ADA) Guide on Dental Lasers, “for erbium laser wavelengths, optical absorption and coagulation depths are significantly smaller than gingival blood vessel diameters. Coagulation takes place on a relatively small spatial scale and in general – based on these particular factors – does not prevent bleeding from the blood vessels severed during tissue ablation.” Furthermore, “the optical absorption and coagulation depths for the CO2 laser wavelengths are effective within the diameters of surface gingival blood vessels. Coagulation extends just deep enough into a severed blood vessel to stop the bleeding.” Examples of Erbium laser wavelengths include Waterlase by Biolase at 2,780 nm and LightWalker by Fotona at 2,940 nm. Examples of CO2 laser wavelengths include LightScalpel at 10,600 nm and Solea by Convergent Dental at 9,300 nm.

Near-infrared dental diode lasers circa 800-1,000 nm do not cut using a laser beam (except for in very darkly pigmented tissue). Instead, the diode laser beam heats the charred end of a fiberoptic glass tip to 500-900° Celsius. The hot glowing glass tip, then, conducts heat to the target tissue. It is an excellent coagulator, but inefficient at cutting.

The key to the success of soft tissue CO2 lasers and their advantages over other dental laser wavelengths is their ability to accurately cut and efficiently coagulate the soft tissue at the same time.

Other Considerations When Choosing a Dental Laser

Try our dental laser ROI calculator, where you can set the laser cost per month, as well as the number of procedures you may do per month. The calculator will then returns your monthly ROI.

The initial cost of a diode laser system is fairly inexpensive, however most all diode lasers require single-use disposable tips. The average cost of a single diode laser tip is around $6. This added expense can really add up over time and cost thousands of dollars per year. LightScalpel CO2 lasers offer tipless autoclavable handpieces.

The LightScalpel is the finest instrument I have used for performing tongue and lip-tie surgeries as well as many other procedures. I use it at least four times a day. Before, we were using a diode laser and it doesn’t even compare. Before, a frenectomy would take around a minute or more. Now with the LightScalpel, it’s about 20 seconds. The moms report less pain for their babies (they eat better and are less fussy)…

CO2 is the gold standard for laser technology, for soft tissue procedures… [diodes] are inefficient compared to the speed of CO2… CO2 simply cuts and ablates tissue much faster. 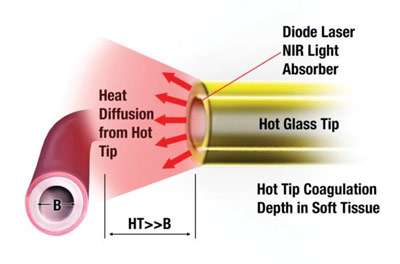 Want to learn more about diode lasers and how work? Check out this article:

This article compares and contrasts the differences in hemostasis and coagulation of erbium, carbon dioxide, and diode (hot-tip) dental lasers.

6
Recommend
Share
Tagged in
Try our laser in your office.
Take a test drive