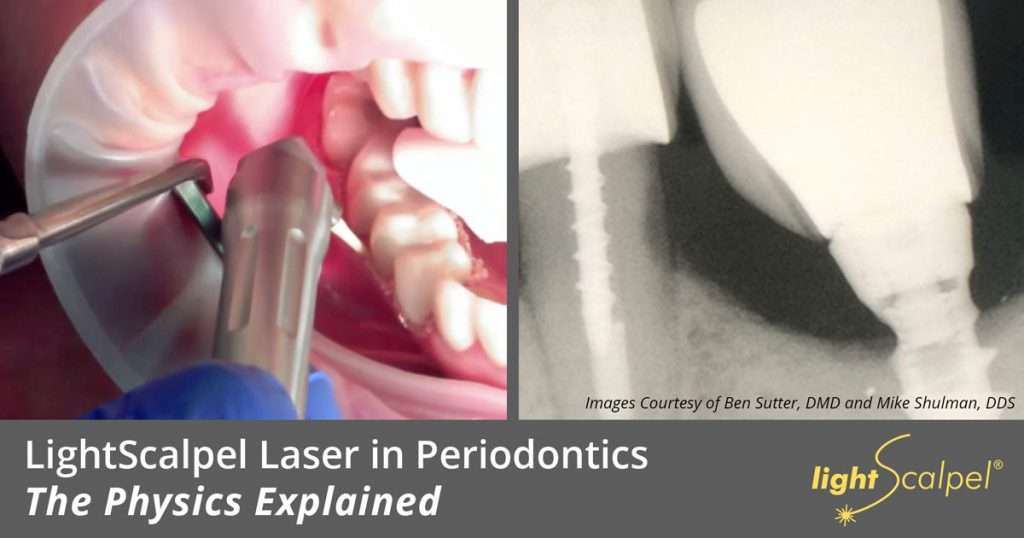 Case Studies and Reports Using LightScalpel and 10,600 nm CO2 lasers in the treatment of periodontitis and periimplantitis using sulcular debridement

In another case study by lead author Dr. Linden, “Implant-safe settings for SuperPulse 10,600 nm CO2 laser-assisted, closed flap peri-implantitis treatment“. He discusses how the LightScalpel’s 10,600 nm wavelength is uniquely safe to use around implants. The LightScalpel laser increases the implant temperature by only about one-tenth as much as a diode.[3]

In an in vitro study by lead author Charles M. Cobb, DDS, MS, PhD, “Effectiveness of a super-pulsed CO2 laser for removal of biofilm from three different types of implant surfaces: an in vitro study“, he specifies how biofilms can be vaporized off of implant surfaces. The LightScalpel in SuperPulse may provide a predictable method of surface decontamination in the treatment of peri-implantitis.[4]

In the article “The Use of CO2 Laser in the Treatment of Peri-implantitis“, lead author George Romanos, DDS, PhD, indicates that the CO2 laser “deserves consideration as an efficacious treatment modality.”[5]

Videos demonstrating the LightScalpel being used in periodontal treatments

This video by Ben Sutter, DDS, illustrates the technique of using the LightScalpel CO2 laser in sulcular debridement (starts at time marker 5:12).

This video by Mike Shulman, DDS, shows before and after x-ray images for 3 successful periimplantitis treatment cases.

In another video, Dr. Shullman shares a couple of his implant cases.

Demonstrating the Physics of How LightScalpel’s Perio-Tip Works

This first video shows the good old way of laser light directed at soft-tissue the usual way i.e. perpendicular to the tissue. The power level is set very low. There is only very superficial ablation and coagulation taking place.

This video shows the same tip used when oriented parallel to the tissue. The same superficial ablation and coagulation take place like in the perpendicular video.

This video uses the same laser tip, but on hard tissue. The tip is orientated so the tip is parallel to the hard-tissue and it illustrates that hard-tissue is not being impacted by the laser energy.

This video illustrates that the Perio-Tip can operate in a liquid environment (a slow air purge is maintained through the laser tip in order to keep any backstream of laser plume or liquids.

This video illustrates that the LightScalpel CO2 laser can effectively coagulate blood if needed.