The article highlights the hazards of surgical use of the diode laser beam in soft tissue.

In order to make the diode laser safe for soft tissue surgery, its tip needs to be coated “black” so that the laser light does not exit the tip, but rather heats up the tip. This makes the diode laser a “hot poker” or a “branding iron” if it is used in a safe fashion with a “coated” tip. Otherwise, the diode laser is surgically unsafe if the laser beam enters the soft tissue.

While using the diode laser beam directly on soft tissue was deemed both ineffective and unsafe, the authors “show that laser-assisted neuroendoscopy can only be considered to be safe when pretreated [specially coated] “black” fiber tips are used.” The authors have determined that, in neuroendoscopy, conventional diode laser application is hazardous.  With the uncoated tip, the 810 nm diode laser light penetrates approximately 8 mm into unpigmented tissue, according to the authors.  Based on their overall findings, the researchers state the following about conventional diode laser applications (and equipment) in neuroendoscopy: “Even in an idealised situation, application of [diode] high-power laser light (e.g., 20W) is necessary during several seconds, inducing tissue changes that extend further into the tissue than can be observed by the surgeon.  An important complicating factor in the use of this high-power laser light, which penetrates deeply before being absorbed totally, is that it may reach vital structures in the vicinity of the target tissue. ”

The authors conclude that the key to safe use of diode laser is to prevent the laser beam from ever reaching the soft tissue. Instead, the diode laser beam only heats up the business end of the beam delivery system: its fiber tip, which is heated to a different degree depending on application. In other words, because the depth of penetration of the 810 nm diode wavelength in soft tissues is so great, while absorption of that same laser light in soft tissues is so small, conventional diode laser light inflicts thermal damage to surrounding, healthy tissue (necrosis).

A word from on-line discussion forums: 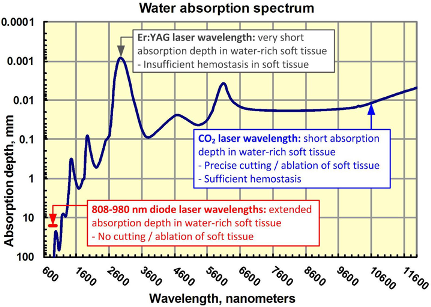