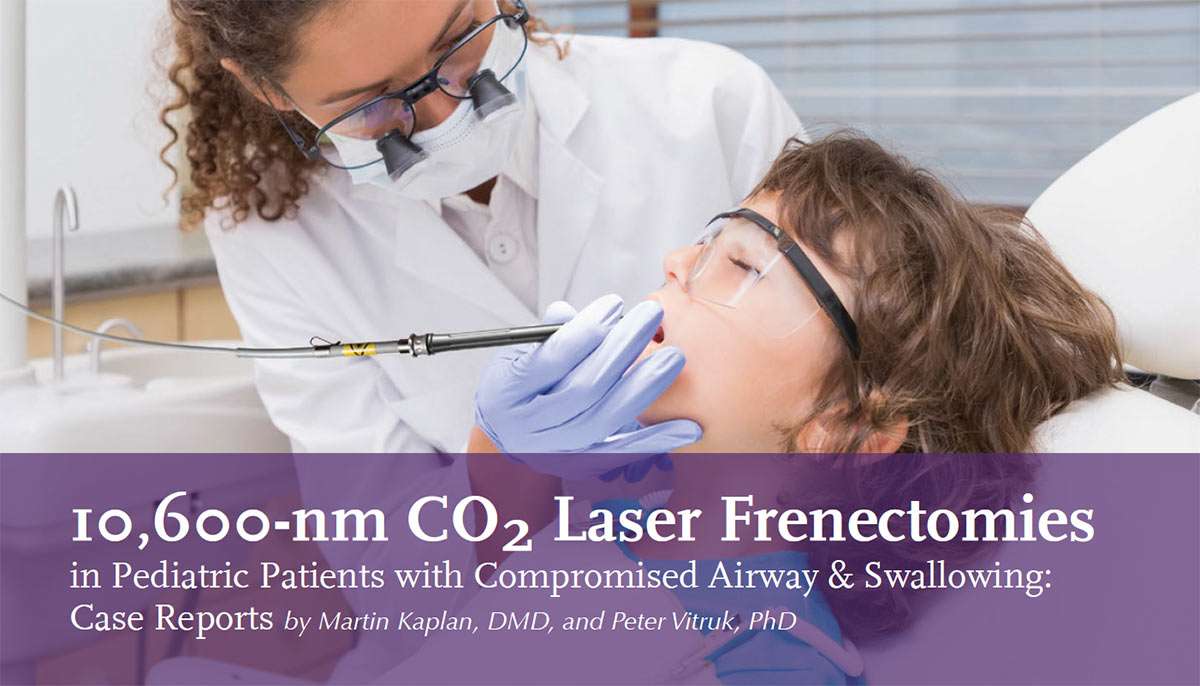 The 10,600-nm CO2 laser provides effective and spatially accurate soft-tissue incisions, with excellent coagulation ability due to close match between photo-thermal coagulation depth and the diameters of oral soft tissue blood capillaries. [1-3] The case studies reported in this article (see Figures 1 and 2) successfully utilize the 10,600-nm CO2 lasers in the Super- Pulse mode, which enables both precise sub-millimeter depth of cut and a miniscule sub-100-micrometer depth of coagulation/ hemostasis (see Figure 3) to maintain bloodless surgical site. Following CO2 laser maxillary labial frenectomy, the treated area heals without complications and with minimal to no scarring.[1-3] The CO2 laser’s ability to achieve hemostasis affords the clinician the improved visibility of the surgical field and allows for more precise and accurate tissue removal than scalpel surgery. Reduced postoperative pain and minimized wound contraction and less keloid and scar tissue formation (attributed to notably fewer myofibroblasts) are among the most beneficial outcomes of CO2 laser treatment, compared to scalpel surgery.

LightScalpel CO2 laser frenectomies for the following case studies were performed by Dr. Kaplan with contra-angled 0.25- mm focal spot size laser handpiece (see Figure 3), delivering 2 watts SuperPulse laser beam gated at 50-60% duty cycle at 20 Hz. Similarly gated non-SuperPulse settings were used for enhanced hemostasis (without cutting). To facilitate the laser procedure, gentle tension was applied to the lip during the labial frenectomy and to the tongue during the lingual frenectomy. All laser surgeries were performed by a surgeon wearing 6x magnification loupes for enhanced visualization of the surgical site (Dr. Kaplan recommends 3.5x magnification as the minimum).

A newborn girl was presented for severe choking. At 2-days old, she almost choked to death on her formula (breastfeeding was difficult and supplemental bottle feeding was recommended), but was saved by her 11-year-old sister who had just learned CPR. The baby was rushed to the hospital and was further evaluated and diagnosed with laryngomalacia; and the mother was told that the girl would eventually outgrow the problem. Dr. Kaplan reached out to the family and volunteered to evaluate and treat the girl free of charge, if there was the problem that he had suspected. After a thorough evaluation, a tongue-tie and a lip-tie were diagnosed. The baby had a class 3/4 corded maxillary lip-tie; her lips were very tight and there was no lip flanging (Figure 1A). The premaxilla with flattened alveolar ridges (seen in Figure 1B) caused the baby’s inability to retain the nipple due to the nipple sliding out. The posterior tongue-tie was a tight, corded and shallow tense membrane (Figure 1D). Both ties clearly exacerbated the baby’s nursing difficulties and choking.

The release of the lip-tie and tongue-tie (immediate post-op photos in Figures 1C and 1E) was a simple in-office procedure with a LightScalpel CO2 laser. Immediately after the procedure, the baby’s lip flange noticeably improved and mouth gape increased by approximately 25%; this made it easier for her to obtain enough of the nipple and areola to initiate a latch. During the post-op exam, Dr. Kaplan noticed that that the mother was hyperflexing the baby and the throat was not in a neutral position. This simple correction immediately provided quiet swallow and improved intake. A private IBCLC (International Board Certified Lactation Consultant) appointment was arranged for the mother and baby to assist with proper breastfeeding or bottle feeding guidance. At a checkup a few days later, the mother reported that they had received proper education and the baby nursed better. Her breathing was quiet and choking was no longer a concern.

Case Study 2: Autistic Patient with Turner Syndrome with a History of Snoring and Restless and Fractured Sleep

A fifteen-year-old autistic female with Turner syndrome was a patient who had required hospital admission for treatment of dental caries under general anesthesia due to her combative behavior and extensive caries since age 11. She had always been a gagging patient with oral aversion to any dental care. Her latest exam revealed a previously unrecognized restrictive tongue frenum, which was thought to be a source of her oral aversion and gagging (Figure 2A shows the thick and fibrous lingual frenal attachment). Since becoming more knowledgeable about apnea and the potential impact of the restrictive lingual frenum on the airway, Dr. Kaplan’s ability to diagnose this previously overlooked tongue-tie associated issue has improved. He was able to recognize the thick and short tongue frenum and consider surgery as a possible treatment to improve not only the reported pattern of restless sleep and snoring, but also the enhanced gagging reflex.

Per routine safety protocol, since the patient was autistic and the airway was the primary focus of the treatment, medical clearance for sedation was obtained. The patient received orally administered midazolam (Versed) for anxiolysis and sedation in an attempt to complete the procedure in the dental office setting. The patient was mildly sedated. For control of possible resistant behavior, she was placed in a loose-fitting adolescent-sized protective restraint which did not inhibit her breathing. The parent was present to assist in the behavior management. The patient was only mildly cooperative, but accepted administration of a minimal amount of topical anesthesia. She would not tolerate local infiltration anesthesia. A molt mouth prop and a Miltex grooved tongue director were used to control oral access for the tongue treatment and to maintain tension on the lingual frenum, as is required for the procedure.

Immediately after the lingual frenectomy procedure was completed, tongue mobility was increased (Figure 2B). The two-week followup confirmed a better sleeping pattern, no more snoring and noticeable improvement in temperament, as reported by her mother. In addition, the patient was now less flatulent, likely indicating an improvement in swallowing mechanics. Treatment was accomplished due to the clinician’s ability to manage this patient in the least threatening and safest outpatient environment. The sedation, although never without risks, was the safest way to attempt treatment and obtain desired clinical results.

Since the laser frenectomy procedure, the patient has been able to undergo additional dental restorative treatment with much improved co-operation. She still has her disability, however, the improvement in sleep has allowed her to demonstrate better day-to-day behavior.

Peter Vitruk, PhD, MInstP, CPhys, is a founder of LightScalpel, LLC in Bothell, WA. He is a member of The Institute of Physics, and a Diplomate of and Special Advisor of Laser Physics & Safety Education at the American Board of Laser Surgery, USA. He is also a founder of the American Laser Study Club. Dr. Vitruk can be reached at 1-866-589-2722 or [email protected].

The authors greatly appreciate the support and contribution from Anna “Anya” Glazkova, PhD, in preparing this material for publication.

1
Recommend
Share
Try our laser in your office.
Take a test drive

Follow us on social media.
Copyright © 2021 LightScalpel - All rights reserved. Terms, pricing, specifications and availability are subject to change without notice.