Lingual Frenectomy and Significance of OMT

Frenectomy utilizing scissors or a scalpel is associated with several drawbacks, such as intra-operative hemorrhage (which impedes the visibility of the surgical field and may ultimately lead to scarring); the need for sutures; post-surgical pain and discomfort; and the potential for infection.[1,2] Electrocautery and dental diode hot glass tip may result in notable thermal injury[3] and consequent prolonged healing. Erbium laser frenectomy necessitates the need to manage intra-operative bleeding, due to the inefficiency of the erbium wavelength for coagulation.[3] The 10,600-nm CO2 laser provides effective and spatially accurate soft-tissue incisions, with excellent coagulation ability due to close match between photo-thermal coagulation depth and the diameters of oral soft tissue blood and lymphatic capillaries.[1,3] As a result, good visibility of the surgical field is maintained and the risk of postoperative edema is reduced. After the removal of the lingual restriction, oro-myofunctional therapy (OMT) is crucial[1] to re-establish the swallowing, chewing, speaking and breathing patterns developed as a consequence of ankyloglossia. Without such therapy, the deviant swallowing, speech impediments, compensatory tongue posture and improper breathing habits persist, which eventually entails the relapse of airway problems, sleep disorders and other preoperative issues.

22-year-old healthy male presented for consideration of a revision of a healed lingual frenum (Figures 1A-1B) released 1.5 years prior with a 940 nm diode hot tip (Biolase®, Irvine, CA). He did not do OMT exercises post-release and his tongue felt tight again. He experienced headaches, bilateral TMJ tenderness, pain and tightness in his neck and between the shoulder blades. The patient reported a history of sleep issues. His symptoms included excessive daytime sleepiness and fatigue, low energy, moodiness, and restlessness. He had no history of drug or alcohol use and was currently taking no medications. The patient had a sleep study performed (WatchPat Home Device) and was diagnosed with a sleep disorder.

Born a healthy male with difficulty breastfeeding, a history of severe reflux with projectile vomiting, colic and inconsolable crying. Mother reported that as an infant, he failed to sustain latch while she experienced pain at latch that persisted throughout the feeding. The mother reported cracked, bruised and bleeding nipples, plugged ducts and mastitis and eventual decrease in milk supply, despite pumping. The patient was placed on formula but continued projectile vomiting, had blood in stool and experienced weight loss. He had frequent ear infections, placed on multiple antibiotics and at 6 months of age had ear tube placed by the ENT. Adenoids and tonsils were removed at two years old due to persistent ear infections and recurrent strep throat. He was subsequently placed on soy formula which helped to resolve the vomiting. He received speech therapy at age 9, and by age 11 resolved most of the speech issues.

Patient had had routine dental hygiene care and required no restorative dentistry. Moderate occlusal wear revealed a history of bruxism, and non-extraction orthodontic therapy involving maxillary palatal expansion and mandibular advancement with a fixed Herbst appliance was also reported. Prior to his diode frenectomy, the patient presented with bilateral TMJ tenderness, asymptomatic bilateral subluxation of the condyles, lateral excursions of 10 mm bilaterally with poor lingual-mandibular differentiation. No nasal deviation was noted, nasal airway was patent. The intraoral exam revealed a restricted lingual frenulum after the previous frenectomy was completed with a 940 nm diode hot tip. There was a decrease in the elevation of the tongue and tongue-to-spot (TTS) placement. At the time of his appointment for the second frenectomy, the patient’s Mallampati score was 2. 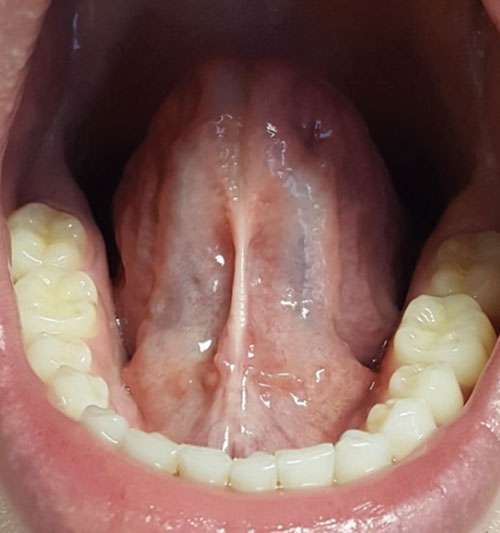 Figure 1A: View prior to CO2 laser frenectomy. The lingual frenum was previously revised with a diode hot tip, but the restriction returned. 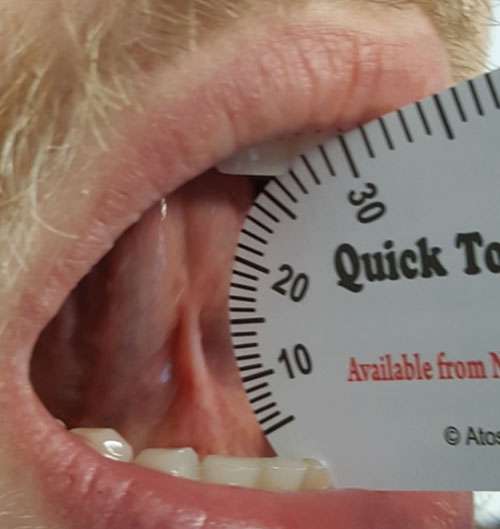 Figure 2 (A-E): A. Grooved tongue director is used to maintain tension. Frenal tissue is “etched” by zigzagging the CO2 laser beam. B. After surface tension startedto release, a horizontal incision is made half-way between the frenal insertion into the tongue and the floor of the mouth. C. Vaporizing fibers and releasingtension. D. Patient is asked to open his mouth wide with tongue anchored to the incisive maxillary papilla. E. The remaining restriction is removed horizontally.

After baseline re-assessment/measurements, local anesthesia (4% Articaine hydrochloride with 1:100,000 epinephrine) was administered by infiltration. The LightScalpel laser surgery was performed (see Figures 1-3) with the assistance of the grooved retractor. LightScalpel CO2 laser with 0.25-mm focal spot size laser handpiece (see Figure 4) was utilized, delivering 2 Watts SuperPulse laser beam gated at 70% duty cycle at 20 Hz (average power to the tissue 1.4 Watts). Similarly gated non-SuperPulse settings for defocused beam is used for enhanced hemostasis without cutting, if needed. To facilitate the laser procedure, gentle tension was applied to the tongue during the lingual frenectomy. At first, the handpiece was held approximately 4 millimeters away from and perpendicular to the target tissue; a zigzagging vertical motion was used to “etch” the tissue (Figure 2A) (“etching” was done to “tenderize” the tissue, where the scarred tissue that resisted cutting was present). As the tissue began to respond to the laser energy, the zigzagging vertical motion was continued until the frenal tension began to release. A horizontal incision at approximately 1 mm handpiece-to-tissue distance was made in the midline, half-way between the frenum insertion to the tongue and the floor of the mouth (Figure 2B); vaporization of fibers continued (Figure 2C). The patient was then asked to place his tongue to spot (the maxillary incisive papilla) and open the mouth as wide as possible and continue to open, while the tongue remained anchored (Figure 2D). This provides the opportunity to watch the increase in opening and further functional elevation resulting from the laser release. This also enables the surgeon to observe and evaluate if tension remains on the floor of the mouth. The tongue director was removed and with the tongue anchored, the noted frenal restriction was further removed in the horizontal direction (at a 1 mm tip-to-tissue distance) (Figure 2E). When the fascia overlying the genioglossus muscle was observed, a finger dissection of the remaining frenal fibers completed the procedure. During the frenectomy, a large sublingual blood vessel was encountered; precise laser cutting and shallow penetration depth allowed the surgeon to remove the tissue around it, while leaving the blood vessel intact. After the tension was released, the patient was asked to extend the tongue and to lateralize it in each direction, with the chin stabilized. This also helps to determine if lingual mandibular differentiation can be observed. Measurements were then re-assessed and recorded at the maximum opening and TTS (Figure 3A) shows that the TTS distance increased by 11 mm to reach 38 mm).

Ten minutes after his CO2 laser frenum release, the patient reported that tightness in his neck and shoulders immediately disappeared. 800 mg Ibuprofen was recommended postoperatively, but the patient did not need it as the surgical site was only mildly sore. Soft diet was advised for the first 24 to 48 hours with the recommendation to avoid spicy, caustic, crunchy or sharp foods. To achieve the maximum range of motion and optimal function, regular OMT was an important part of postoperative protocol. For five weeks after the surgery, five times a day, the patient performed five sets of eleven exercises (the routine adapted from the Myo Manual). He was also instructed to wear his new sleep appliance, mandibular advancement device (MAD), nightly to keep his oropharyngeal airway patent. He quickly adjusted to the new appliance and soon reported improvements in his sleep quality and restfulness. During the visit to his chiropractor within the first week after the laser release, he noted that his neck adjustment, unlike all of the prior ones, was “as smooth as butter”. With the combination of his post-release OMT and wearing the MAD, the patient reported the resolution of pain in his TMJ and neck. Six months after the surgery the MAD is still necessary for maintaining quality of life (and differences are seen when the appliance is not worn). The patient was highly compliant with the OMT and the surgical site healed without complications (Figure 3B).

Figure 3A: Immediately after the tongue tie release, the tongue-to-spot distance has increased from 27 mm to 38 mm. 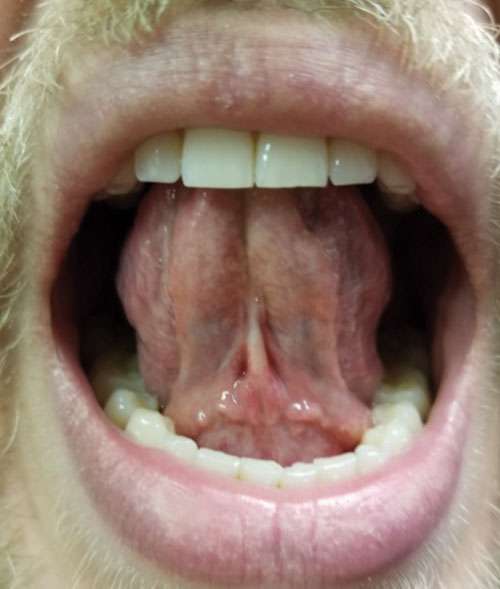 The proper orofacial function in patients can be restored through an extensive functional release[1] of restrictive lingual frenum. The functional release is achieved through a) the SuperPulse CO2 laser frenectomy accompanied by the tongue mobility assessment to ensure optimal function; and b) mandatory OMT. Due to reduced wound contraction, minimal thermal tissue damage, less traumatic surgery, precise depth of incision and hemostatic efficiency, the SuperPulse 10,600 nm CO2 laser presents an effective alternative to scalpel, electrocautery, diodes and erbium lasers. 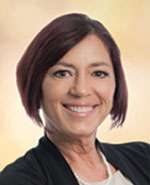 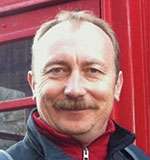 Peter Vitruk, PhD, is a founder of LightScalpel, LLC in Bothell, WA. He is a member of The Institute of Physics, a Diplomate of the American Board of Laser Surgery, USA, and its current Director of Laser Physics and Safety Education, and a founder of American Laser Study Club. Dr. Vitruk can be reached at 1-866-589-2722 or pvitruk@lightscalpel.com.

The authors greatly appreciate the support and contribution from Anna “Anya” Glazkova, PhD, in preparing this material for publication.