Frenotomies performed with a scalpel or scissors can be accompanied by significant bleeding, obscuring the surgical field making it difficult to ensure if the restriction has been completely removed. Because of the increased risk of early primary closure of the site, postoperative active wound care is essential to reduce the risk of potential scarring. To properly restore and maintain optimum function, active wound care should be implemented as soon as possible. However, if sutures are placed, the active wound care may be delayed so as not to cause early tearing of tissue. Due to the contact nature of conventional procedure, there is a certain potential for infection; in addition, higher levels of postoperative pain and discomfort have been reported.[1,2] Electrocautery and a hot glass tip of dental diodes may leave a fairly substantial zone of thermal tissue change[3] and may result in delayed healing. Erbium lasers produce excellent incisions, but are not efficient for coagulation.[3] Therefore, the clinician utilizing an erbium wavelength for frenectomy may need to control intra-operative bleeding. The 10,600-nm CO2 laser has been shown to accurately incise soft tissue, with simultaneous efficient coagulation. The photo-thermal coagulation depth of this wavelength closely matches the diameters of small oral soft tissue blood and lymphatic vasculature.[1,3] This helps maintain a clear surgical site and reduces the risk of postoperative edema.

Frenectomy and role of OFMT

Improperly formed orofacial structures and deviant swallowing, chewing, speaking, and breathing patterns may be caused by incorrect oral posture and oral restrictions. Therefore, in the authors’ opinion, the removal of oral restrictions is necessary to attain optimal orofacial function, and must be combined with regular pre- and post-frenectomy orofacial myofunctional therapy (OMT).[1,4] OMT helps re-educate the tongue and orofacial muscles during movement and at rest to create new neuromuscular patterns for proper oral function, including chewing, swallowing, speaking, and breathing.[5,6] Camacho et al.[7] demonstrated the reduction of apnea-hypopnea index in children and adults following myofunctional therapy. In the absence of such re-education therapy, deviant oral and breathing habits may continue to exist, eventually leading to the return of airway and sleep issues that preceded frenectomy.[1,5]

A 29 year old Caucasian female (an orofacial myologist) presented to a dental sleep office for labial and lingual laser frenectomy. The patient was unable to efficiently progress through myofunctional therapy due to tethered oral tissues. She had always struggled to maintain a proper lip seal due to a restricted labial frenum and demonstrated a short upper lip from mouth breathing. While treating her own clients, she was unable to demonstrate certain myofunctional therapy exercises that were required elevation of the middle and posterior portions of the tongue. The patient hoped the frenectomy procedures would aide in her ability to create a lip seal, correct her tongue rest posture, and establish a proper swallowing pattern.

The patient was bottle fed during infancy. A history of thumb-sucking and pacifier use until the age of four were reported. At the age of seven, the patient underwent adenoidectomy and tonsillectomy. She had a deviated septum after breaking her nose at the age of nine (this has not been corrected), and reported frequent mouth breathing. The patient had orthodontic treatment from age twelve to fourteen that included rapid palatal expansion and retractive headgear. Due to orthodontic relapse, she also had orthodontic treatment at age twenty and again at age twenty five. 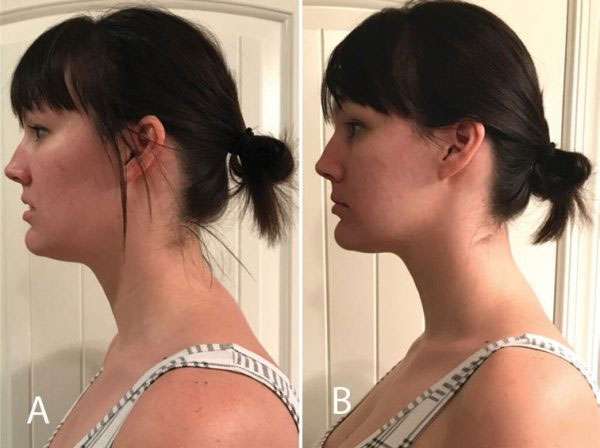 The following TMD symptoms were observed: jaw deviation to the right along with clicking / popping / crepitus on the right side (Figures 1A and 1B). The patient reported neck pain and frequent headaches. 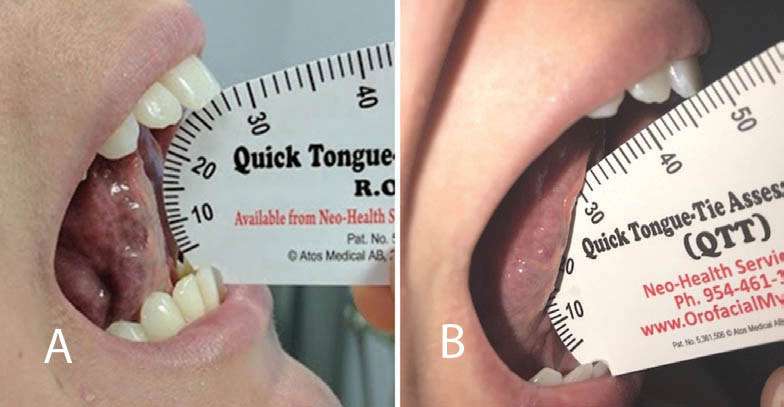 The patient had a long, narrow face, low facial muscle tone, a short upper lip (philtrum was 14 mm long), and open mouth resting posture with the 7 mm interlabial gap (Figure 2A). The patient reported mouth breathing all night, regular night time drooling, restless sleep, and frequent waking. She complained of daytime fatigue and never waking well rested. Her left nostril “whistled” during nasal breathing, and she was frequently congested. Moreover, the patient had a forward head/neck and forward rolled shoulder posture; she reported significant tension in the neck and shoulders and was concerned about Dowager’s hump formation (Figures 2A and 3A). She had a bilateral tongue thrust during swallowing and low tongue resting posture (tongue tip resting against lower incisors). The patient reported dry, chapped lips and the habits of lip licking, cheek biting and clenching.

Intraoral examination revealed a narrow, high palatal vault with pronounced rugae, and narrow soft palate. The tight upper labial frenum and attached gingiva blanched when extending the upper lip. The tongue appeared short and wide with a tight, restrictive lingual frenum. The functional range of motion (ROM) was 60.8%: the full ROM was 46 mm, and the ROM with tongue tip to incisive papilla was 28 mm (Figure 4A). The patient’s Mallampati score was IV (Figure 5A).

At the time of the visit, no medications were taken; no known drug allergies, recent illnesses, or hospitalizations were reported.

After local anesthetic (Articaine hydrochloride 4% with 1:100,000 epinephrine) was administered by infiltration, the LightScalpel laser frenectomy was performed to release both the maxillary labial and lingual restrictions. LightScalpel® CO2 laser (LightScalpel, LLC, Bothell, WA) with 0.25 mm focal spot size laser handpiece was utilized, delivering 2 watts SuperPulse laser beam gated at 70% duty cycle at 20 Hz (average power to the tissue was 1.4 watts). For efficient incision, gentle traction tension was applied to the tongue and the lip during lingual and labial procedures, respectively. The laser nozzle was held 1-3 mm away from the target tissue and moved in zigzagging fashion until the tension was released. As frenectomy progressed, the dentist stopped several times to evaluate the extent of release and the function of the lip and the tongue. Minor bleeding was encountered during the labial procedure, but was quickly resolved by switching to the non-SuperPulse mode and increasing the distance between the nozzle and target tissue (i.e., defocusing the laser beam).

After the tension was released, the patient was asked to lift, extend, and lateralize the tongue, with the chin stabilized. This allows the dentist to see if lingual mandibular differentiation can be observed. The upper lip was retracted and a finger dissection of the remaining frenal fibers completed the procedure. After the surgery, the patient gained 19 mm in the ROM with tongue tip to incisive papilla – from 28 mm to 47 mm (Figure 4B). Almost immediately after the CO2 laser frenectomies, the patient reported less neck and shoulder tension, felt she could stand up straighter, and that her “airway feels more open” when breathing. She was able to close her mouth comfortably and without strain on her upper lip. She was able to elevate the middle and posterior portions of the tongue to the palate, and complete previously difficult myofunctional exercises with ease. 800 mg Ibuprofen was taken twice the day of and once the day after the procedure for minor postoperative soreness, and a soft, bland diet was maintained for 48 hours.

As an orofacial myologist, the patient was diligent with her active wound management and strictly followed her customized, progressive OMT regimen in order to achieve optimal healing of frenectomy sites, maximum ROM, and optimal oral function. Healing progressed with no complications (Figure 6 demonstrates lingual healing). At 10.5 months post frenectomy, the patient’s functional range of motion (ROM) was 94%: the full ROM was 50 mm, and the ROM with tongue tip to incisive papilla was 47 mm.

OMT helped the patient retrain and re-pattern neuromuscular movements that had been foreign to her and helped her integrate them into her everyday life. The establishment of proper oral rest posture (tongue to palate, instead of in the floor of the mouth), lip competence (no open mouth posture at rest – Figure 2B), nasal breathing (this got increasingly easier aided with Buteyko breathing techniques, even with a deviated septum), and correct chewing and swallowing patterns has made a profound difference in her life. She has better posture, more energy, eats less, feels rested in the morning, and sleeps through the night. Her bilateral tongue thrust has been eliminated and night time drooling has been resolved. The patient reports a decrease in clenching and biting the sides of her tongue at night. As a long term goal, the patient intends to continue working on oral habituation and improving/maintaining better posture. The patient was informed that if symptoms of sleep disordered breathing returned, she would be referred to a sleep medicine physician for further evaluation.

Optimal orofacial function in adult patients can be achieved through the extensive functional release[1] of restrictive oral tissues. The functional release is accomplished through a) the SuperPulse CO2 laser frenectomy performed with the tongue and lip mobility assessment; and b) regular pre- and post-frenectomy OFMT. Brooke Pettus, RDH, BSDH, COMS, is the owner of Myofunction Junction in Richmond, VA, where she works full time helping children overcome oral habits and myofunctional needs. She has trained through the Academy of Orofacial Myofunctional Therapy, the International Association of Orofacial Myology, MyoMentor, and is a certified orofacial myology specialist through the Graduate School of Behavioral Health Sciences. Brooke has spent hundreds of hours studying with, learning from, and partnering alongside pediatric and airway-focused dentists and orthodontists, speech language pathologists, ENTs, occupational therapists, and lactation consultants. She strongly believes a team approach is necessary for optimal oromyofunctional outcomes. Brooke graduated from Virginia Commonwealth University in 2009. She has spoken nationally and internationally on a variety of oral health topics.