Tongue-Ties and Sleep Issues (and More!) A tongue-tie is a thick, tight, or short string of tissue under the tongue that restricts the tongue’s movement and causes a functional issue. Collectively, tongue-ties and lip-ties are referred to as tethered oral tissues. They are often misdiagnosed or misunderstood, and they are quite common. The frequency with which anterior tongue-ties occur is estimated to range from 4-10% in the general population, and posterior tongue-ties have been reported in as many as 32.5% of infants in a recent study.[1] For a tight piece of tissue to qualify as a tongue-tie, it must have a functional impact on nursing, speech, feeding, or sleep. Infant problems arising from tongue-ties include painful and prolonged nursing episodes, poor stimulation of maternal milk production, reflux, slow weight gain, gassiness, and a host of other issues for mom and/or baby. As babies advance to eating solids, tongueties can lead to gagging, refusing food, spitting out food, and picky eating. Speech delays, articulation issues (trouble with R, L, S, SH, TH, and Z sounds in particular), and stuttering may arise as well. Finally, sleep is often impacted, beginning in infancy. If tongue-ties remain untreated, they can lead to structural and functional changes in the craniofacial-respiratory complex and can impact sleep throughout the lifespan.

Tongue-ties and low tongue resting postures often lead to or exacerbate mouth breathing. Mouth breathing prevents the brain from experiencing the deepest level of sleep. As a result, people who mouth breathe at night often awaken unrefreshed. Children and adults may be getting the right quantity of sleep at night, but many are not getting the quality of sleep that they need. Snoring is a red flag and signals that obstructive sleep apnea or sleep-disordered breathing is likely. Upper airway resistance and poor nasal breathing can be caused by a smaller-than-normal nasal cavity, deviated septum, or high arched palate.[2] All of those may develop when there is insufficient pressure from the tongue against the palate both in utero and during infancy.[2]

A baby with an anterior (near or at the tip) tongue-tie or a hidden (submucosal) posterior tongue-tie is often born with a high arched palate. These common tethers keep the tongue in a low position in utero, so the palate does not receive its natural resting pressure from the tongue, and instead of a broad, flat palate, the baby is born with a high arched or “bubble” palate which leaves less room for the base of the nose and less volume available for the nasal cavity. Tongue-ties also lead to several of the main causes of breastfeeding cessation, including nipple pain, trouble latching, and concerns that the baby is not getting enough milk.[3] It has been demonstrated in many controlled studies that releasing tongue-ties, whether classic near-the-tip anterior tongue-ties or posterior tongue-ties, improves breastfeeding outcomes, allows mothers to nurse more comfortably, and helps babies to suck more efficiently.[4–8] It is said that nursing is nature’s palatal expander—meaning that the action of breastfeeding works to broaden the palate and increase the size of the nasal cavity. Many airway issues that continue into childhood and even adulthood can be traced back to factors in infancy which promote the high palate; for example, low tongue posture (often from a tie), bottle-feeding, and a defective swallow. A tongue-tie release in infancy along with breastfeeding can help prevent adult airway constrictions by allowing the infant to develop a broad, flat palate and spacious nasal passages and sinuses.

As the baby matures, after 6 months of breastfeeding, the practice of “baby-led weaning,” or simply introducing solid food as early as safely possible, encourages the baby to chew different textures and helps to develop the jaws better than pureed baby food. Mothers should still breastfeed until the baby is at least 12 months old, or longer, as mother and baby desire. More exercise of the jaws beginning at birth and throughout growth and development means an increased size of the jaws and decreased risk of malocclusion, less need for orthodontics, and even avoiding wisdom tooth extraction.[9] Conversely, if a person’s jaws are less developed, the tongue is forced to rest down and reside in part of the throat, taking up valuable airway space. If the palate is narrow and the lower jaw is restricted or retruded, the lower jaw also takes up airway space. This phenomenon can also occur from a tongue that is held down by a tie. The tongue is then unable to rest in the palate, so functionally (even if the palate is broad) the only place left for the tongue to go is backward, which closes off part of the airway. Narrow palates and soft palate elongations have been associated with tongueties in a recent study.[10] After full tongue-tie releases, children and adults are often found to sleep more deeply, snore less, exhibit fewer movements, and feel more refreshed in the morning. Often the parents and patients themselves report better concentration and less hyperactivity as well. It is fascinating that a hidden string can have such a dramatic impact on human physiology and quality of life.

Often after a frenectomy or tongue-tie release procedure, the patient will notice a deeper quality of sleep and the parents will notice less snoring, less movement, less waking, and better mood in their child. These findings are some of the most consistent findings in our pediatric patients and often result within the first few days after the procedure. Older children and adults will require therapy (myofunctional, speech, bodywork, etc.) for a full resolution of symptoms, and many with narrow dental arches will need expansion and growth appliances to make room for the newly released tongue. For some young children, a release has the potential to improve the quality and quantity of sleep, which impacts not just the child, but the entire family.

Figure 1: An infant with a lip-tie and to the tip anterior tongue-tie, before and immediately after laser release.

Figure 2: Example of a typical posterior tongue-tie release in a child. After CO2 laser release, minimal to no bleeding, and clean margins with precise control of the surgical site.

A nine-year-old autistic male patient who had trouble with speech, feeding, sleep, and reflux was presented by his mother for evaluation. His symptoms included frustration with communication, speech delay until age 5, poor speech intelligibility, chronic reflux since infancy, poor weight lifelong (4th percentile), and anterior loss of milk during bottle-feeding as a baby. Solid feeding had always been a challenge, and he was a “very slow eater.” He packed food in his cheeks “like a chipmunk”, choked and gagged on food, and spit food out frequently. His sleep quality and quantity were both poor according to his family. He had difficulty going to sleep, awakened easily and often, slept in strange positions, moved and kicked at night, ground his teeth, breathed orally at night, and snored often. His tongue-tie was a posterior tongue-tie and was therefore not recognized by his healthcare providers. It was not deemed to be a likely contributor to any of his issues previously (which is common in children with autism).

It is fascinating that a hidden string can have such a dramatic impact on human physiology and quality of life.

After a full history was obtained and all related symptoms, risks, and benefits of the procedure were discussed with his parents, they chose to have him undergo a lingual frenectomy. The instrument utilized was the 10,600 nm CO2 laser (LS-1005 LightScalpel, Bothell WA). The area was anesthetized with a compounded topical anesthetic, but neither nitrous oxide, oral sedation, general anesthesia, nor injected local anesthetic were used. A mouth prop was used, as well as two assistants to stabilize the patient, who was initially combative, but with the CO2 laser, the procedure was quick, and he calmed down even during the procedure itself. After 10 seconds of lasing at 3 W pulsed (Non-SuperPulse), 29 Hz, 72.5% duty (2.1 W avg), the tissue was vaporized with no bleeding or stitches, and minimal discomfort to the patient. The patient was instructed to perform oral exercises at home for three weeks postoperatively and the parents were shown how to do wound lifts if he would allow them. Two weeks later, the patient returned for a visit, and the mother reported that his “sleeping and eating improvement [had] been unreal.” It was easier for him to communicate, he was less frustrated when eating, his appetite had improved, he was swallowing more easily, he was finishing more of his meals, he was spitting food out less often, he was not gagging or choking on food at all, and he had less reflux. His sleep was also significantly improved. He fell asleep more easily and awakened less than before the frenectomy He moved and contorted his body less during the night. He snored less, stopped mouth breathing and quit grinding his teeth.

Children experiencing sleep issues should be evaluated for speech, feeding, and other disorders, and if these are present, they should lead the provider to suspect a tongue-tie. An examination by a tie-savvy provider should be performed. Releasing a tongue-tie can and does impact sleep quantity and quality in addition to nursing, speech, feeding, and growth. The CO2 laser release is quick, very low-risk, and minimally invasive. It should be the first-line treatment for children and adults who present with symptomatic tongue-ties, in conjunction with an interdisciplinary team including myofunctional therapists, speech therapists, ENTs, and for infants, lactation specialists.

More information on tongue-ties can be found in the recently released book, Tongue-Tied: How a Tiny String Under the Tongue Impacts Nursing, Speech, Feeding, and More by Dr. Richard Baxter, DMD, MS, and seven other healthcare professionals. Available on Amazon.com. 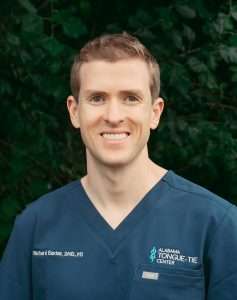 Dr. Richard Baxter is a board-certified pediatric dentist and a diplomate of the American Board of Laser Surgery. He lives in Birmingham, AL with his wife Tara, and twin girls, Hannah and Noelle. He is the founder and owner of Shelby Pediatric Dentistry and Alabama Tongue-Tie Center where he uses the CO2 laser to release oral restrictions that are causing nursing, speaking, dental, sleep and feeding issues. He is also the lead author and publisher of the new book Tongue-Tied: How a Tiny String Under the Tongue Impacts Nursing, Speech, Feeding, and More. He had a tongue-tie himself, and his twin girls were treated for tongue and lip-tie at birth, so for him, this field is a personal one. In his free time, he enjoys spending time with his family, reading, and outdoor activities. Dr. Baxter also participates in many overseas dental mission trips and is an elder in his church, The Church at Brook Hills.

1
Recommend
Share
Try our laser in your office.
Take a test drive